Think You Know How to Tie Your Shoes? Think Again! Shoe Tying 101


It's the little things in life that drive you crazy. Like tying your shoelaces, only to have to tie them again a few hours later.

Always drove me crazy.....until I discovered how to "beat" the shoelaces once and for all.

Now, this isn't an earth shattering blog post, but it does make your life just  a bit easier,,,,,and that's my goal.


Problem: shoelaces that always untie like magic - especially those round ones that are on all athletic shoes nowadays.

1.tie an overhand knot at the end of each lace.

2. tie the shoe like you normally would, but pull the laces all the way through until you reach the knots you just tied. Normally you would only pull about half way, but instead, just keep pulling. The knots will stop the laces from pulling all the way through and out. Hard to explain, easy to do.

The action of pulling the laces all the way through to the knots is what keeps the knot from untying.

And yes, that is a really large (men's size 12) blue sneaker with hippos on it. Anyone else have a teen boy who's really into pop culture? Anyone?

P.S. - Hey - I'm starting something new! In addition to my once a week blog posts (leave your email in the box on the right next to the title if you want to get them automatically), I'm going to start sending out a quick happiness idea every Friday morning. Want to be in the club that gets them? Shoot me an email at: evelyn@organizingwithevelyn.com or leave a comment below.
Posted by Evelyn Cucchiara at 8:08 AM 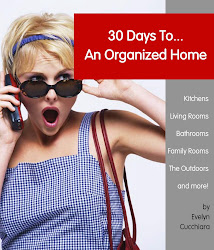